LABANOTATION is the movement language used at ISMA . It is a system of analyzing and recording movement, which was first published by Rudolph Laban in 1928 as “Kinetographie.” The system continued to develop in the United States as Labanotation. It is called Kinetography Laban in Europe and South America.

Direction and Level of the Movement – The shape of the symbol indicates the different directions in space. The basic symbol is a rectangle, which indicates no direction. That rectangular shape is adapted to form the eight directions: forward, back, side left, side right, and the four diagonal directions. The shading within the symbol specifies the level of the movement:low, middle, or high. (See Figure A below)

Duration of the Movement – The staff is read from bottom to top and the length of a symbol defines the duration of the movement. Labanotation uses bar lines to mark the measures and double bar lines at the start and end of the movement score (See Figure B below). Transference of weight, center of weight, spatial distance, spatial relationships, turns, body parts, paths, and floor plans can all be notated by specific symbols. Jumps are indicated by an absence of any symbol in the support column, indicating that no part of the body is supported or touching the floor.

Dynamics of the Movement – The dynamic quality is often indicated through the use of effort signs and a set of symbols indicating a rise or lowering of energy. The four effort categories are:

Figure A —The rectangular shape is adapted to form the eight directions: forward, back, side left, side right, and the four diagonal directions. The three levels of the body in movement are low, middle, and high. 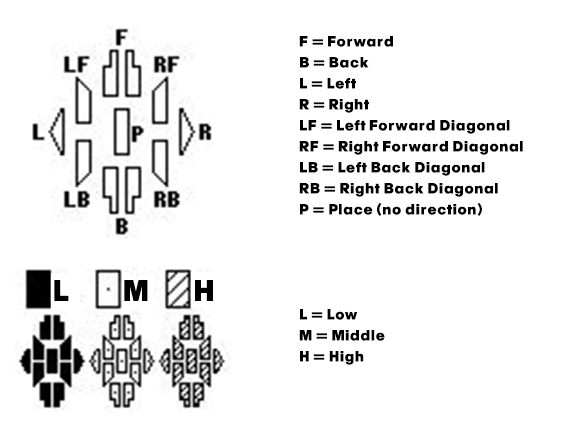 Figure B — Three vertical line staff, read from the bottom to top. The middle line represents the body’s central line that divides the body from left and right. 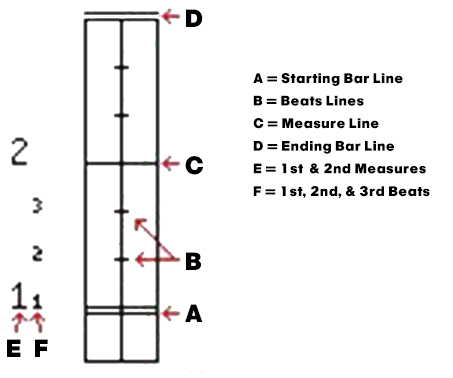 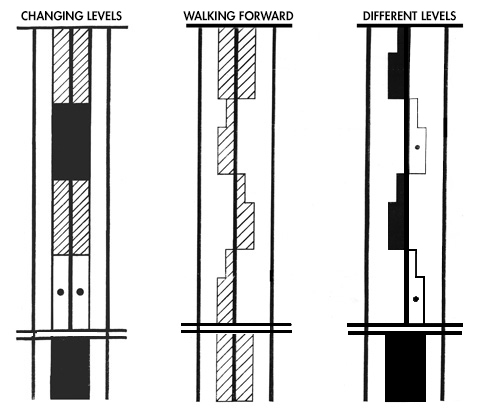 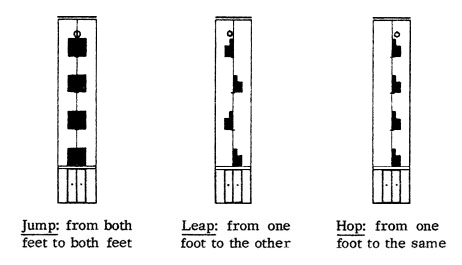